Hopefully, you will have no need to use a hyperbaric chamber when diving here in Cozumel. However, it`s reassuring to know that there are five of them here on the island. The International Hospital, which is located in the heart of town, opened Cozumel’s very first recompression chamber in 1987. It is a leading facility for the Subaquatic Safety Services (SSS) network, a worldwide group of affiliated chambers. The SSS group has chambers in countries such as Belize, Galapagos and Phuket, as well as three here in Mexico; the other two in Playa del Carmen and Cabo San Lucas. 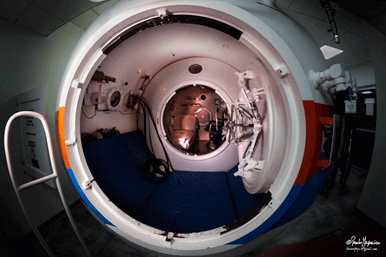 I visited the hospital to see the chamber for myself and to learn    more about what happens when a diver is brought in with suspected decompression sickness.  I met with Hanns Lampe,  the Executive Assistant to the CEO.  He told me about the facilities at the hospital, which in addition to the hyperbaric chamber include services such as CT Scan, Ultrasound, MRI, and X-Ray, as well as rooms for emergency hospitalisation and operating suites. Besides doctors that are specialised in Hyperbaric and Subaquatic Medicine there are also physicians specialising in other areas such as orthopedics and surgery. There are two ambulances operated by the hospital that stand by round the clock at two remote bases. One located in Cozumel’s south hotel zone and one at Marina Fonatur which also has a clinic and onsite doctor. 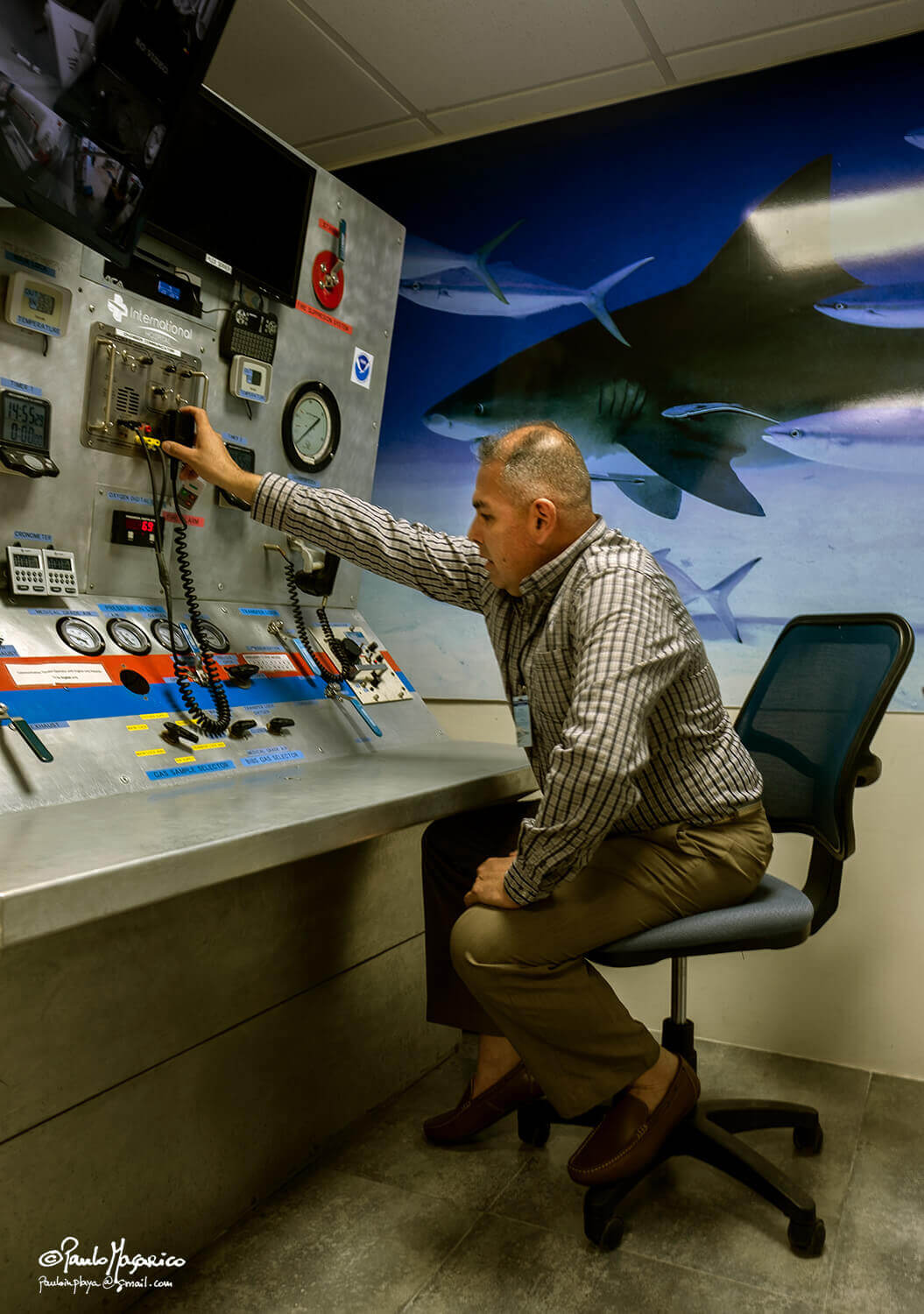 Hanns showed me the hyperbaric chamber and briefly explained how it operates. After consultation with a doctor and any necessary scans, the patient is place in the chamber along with a doctor or a support volunteer known as a tender, a fellow diver who has undergone special training with an SSS clinician to learn how to attend to someone with decompression illness (DCI).  The chamber operator then adjusts the atmospheric pressure using air compressors whilst the patient breaths 100% oxygen through a mask with short intervals of normal air. The operator commonly follows the treatment schedule outlined in US Navy Table 6, requiring the patient to spend around 300 minutes (5Hours) inside. This of course can vary if a patient doesn`t recover after this time and further treatment is needed. The long wait of a chamber stay may feel less monotonous by watching some of the films provided by the hospital.

The main chamber at the hospital is a multi-chamber, meaning it has an inner and outer section. This allows the person accompanying the patient to go in and out or switch with someone as needed. It also means that, if necessary, two patients can be treated at the same time. There is also a separate mono-chamber. Which is utilised for hyperbaric oxygen therapy (HBOT), used mainly for the healing of wounds and soft tissue infections. 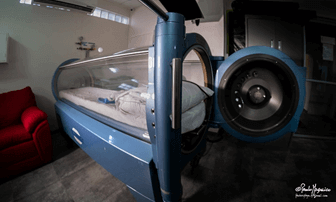 After speaking to Hanns I met with one of the doctors, Dr Edgar Martinez, who specialises in Hyperbaric and Subaquatic Medicine. He told me more about the type of patients that benefit from HBOT. Recently they treated a lady who had a brain tumor removed and the therapy was given to help heal the tissue that surrounded the tumor. This therapy was also just employed on a person with a foot infection, caused by diabetes.

He went on to tell me about a condition known as Patent Foramen Ovale (PFO) in which a flap between the atrial chambers of the heart doesn`t seal properly when the chest is put under increased pressure, as it is when diving, allowing bubbles to pass into the arterial circulation. A lot of research has been done on this in the past few years and Dr Martinez told me that a massive 90% of divers he has seen with DCI have been identified as having this condition. All patients with DCI who are brought to this hospital are offered an ultrasound to check for the presence of PFO.

Finally, we spoke about the things we can all do as divers to make us less susceptible to DCI. Obviously staying within the limits of our recreational dive tables but other factors such as not drinking alcohol, being well hydrated and keeping in good general health. Vigorous exercise and massages should be avoided for 12 hours after diving. It is also unadvisable to rapidly increase our body`s temperature by sunbathing, taking a sauna or a hot shower. 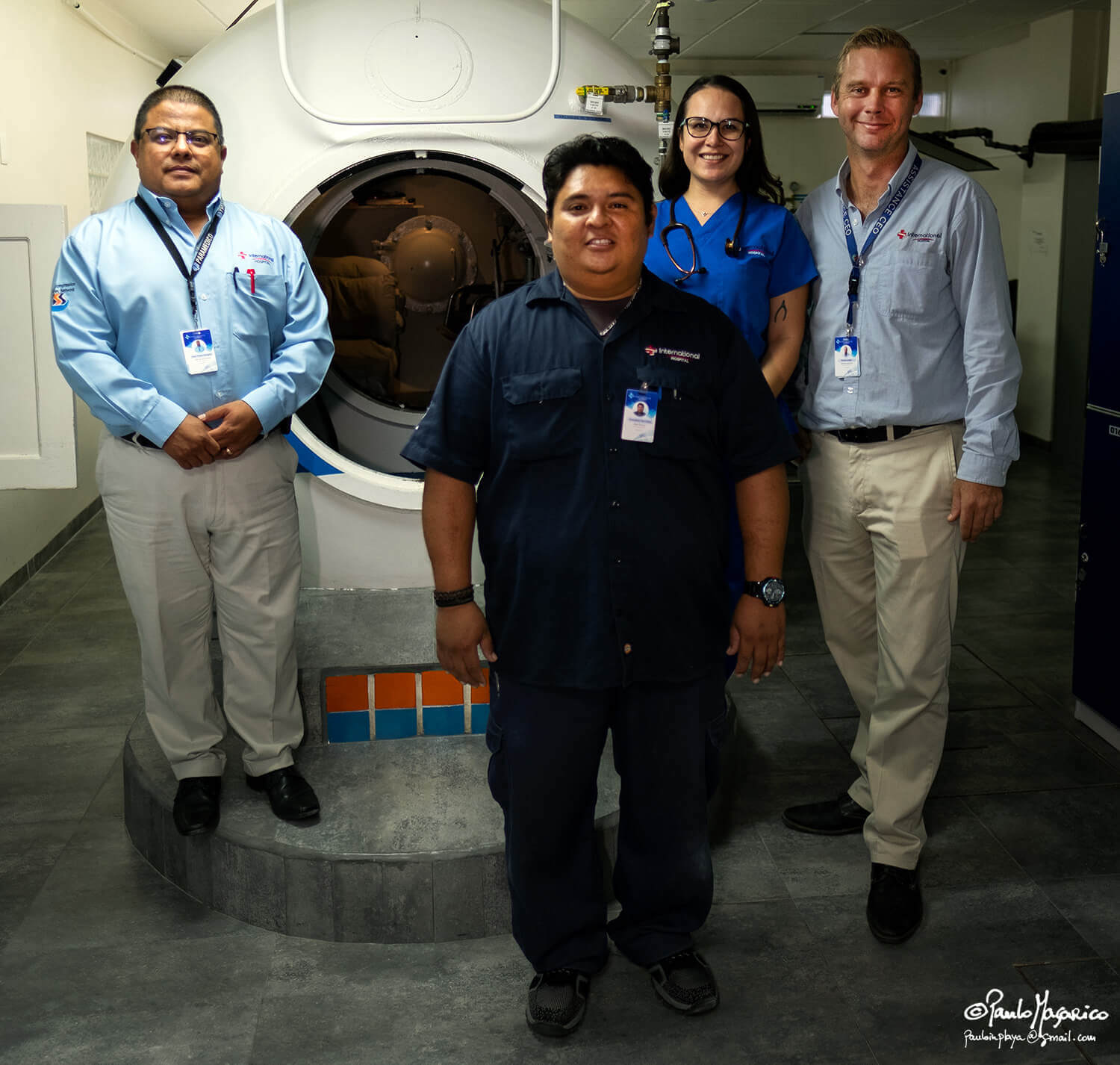 A visit to the hyperbaric chamber at Cozumel`s International Hospital.

Murals painted all over Cozumel to raise awareness for ocean…

Meet Paulo, learn about our Splendid Toadfish, and It's CARNIVAL…