All of us at Deep Blue are friendly, professional, highly qualified, and multilingual

Most of the staff that will take you diving are Instructors with many years experience in Cozumel. Collectively we can communicate with you in many languages - English, Spanish, French,  and German. We are all here to ensure you have a fun, safe, and memorable experience. 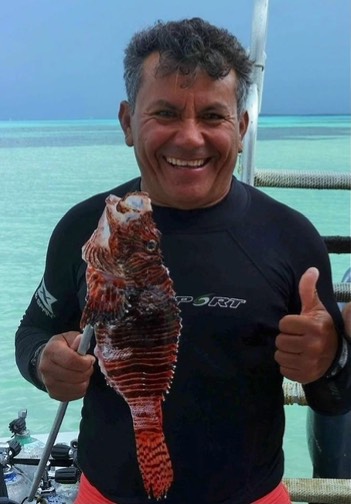 Aristeo is one of Deep Blue's most popular Dive Masters as well as a skilled lionfish hunter!  He was born in Bacalar, Mexico, where he lived until the age of 4. His family moved to the Yucatan where he lived until he was 10 before moving to Cozumel with his uncle. He has been in Cozumel, mostly underwater :-), ever since!
At age 18, Aristeo started working cleaning boats, then became a sailor and a captain, and started diving.  He took his Dive Master Course at Fantasea Divers and worked for them for 5 years. He then worked for Equalizer Divers and then freelanced for years before landing at Deep Blue in 2011.
In his free time, he likes to do shore dives, snorkel, fish (anything water-related!), and take trips to the Yucatan Peninsula,  specifically Merida and Valladolid. He also enjoys spending time with his family.  He has 3 children (all living in Cozumel), and 2 granddaughters.
Aristeo has a huge following of divers that come back to dive with him over and over again.  He has an amazing skill at finding the smallest, most interesting creatures during the dives. He is also very involved with the Marine Park and its efforts to keep the lionfish population under control, which is critical, in order to keep our marine life abundant and healthy.

He was recognazied by the City of Cozumel in 2021 with a very prestigious award for 20 years of Outrstanding Service in the Diving Community. 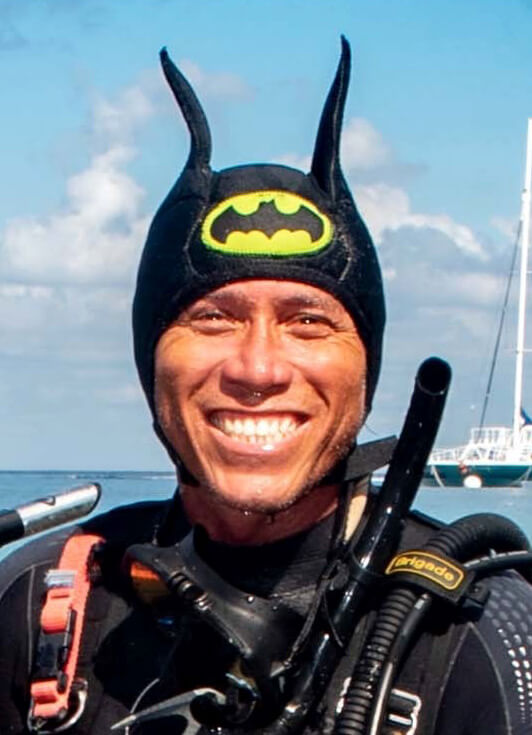 Sandro was born in the Yucatan, and  has lived in Cozumel for the last 35 years. He came at age 9 to play baseball and quickly fell in love with the island and it`s beautiful waters. Leaving his mother and large family at the tender age of 15, carrying just a backpack, he hitchhiked his way to Playa del Carmen before making the crossing to Cozumel. By 1989 he was a Dive Master. Finding passion for diving, he started working his way up the professional ranks and became an instructor in 2010. He has been with Deep Blue since 2000.

Sandro enjoys playing volleyball and going to the gym. He is also big watersports fan that enjoys windsurfing, and waterskiing.

Sandro has 4 kids and a bunch of grandkids and is better known as "Batman" - you can see why.... 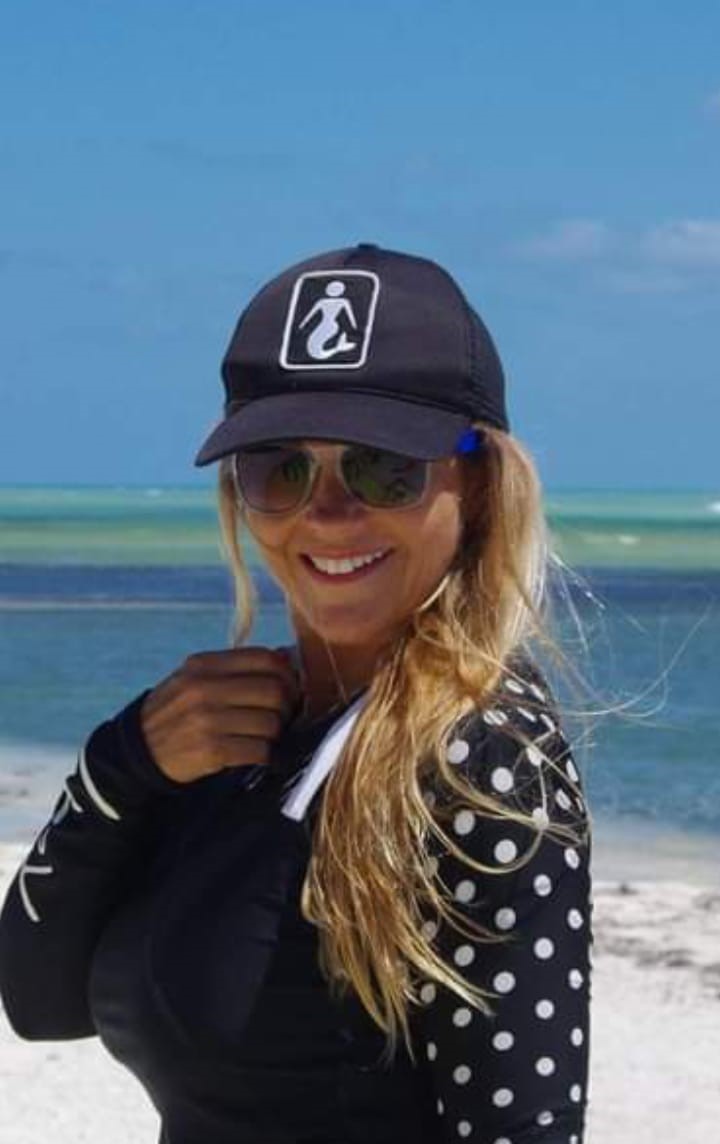 Gigi is a Dive Master and Instructor at Deep Blue since 2019.  She was born in Nebraska but lived in Oklahoma from the age of 10. She came to Cozumel on vacation in 1998 and did her first snorkel and discover scuba dive and fell in love with it!  When she returned to the US she got Open Water certified. She then decided to become a Dive Master and Instructor in 2015.

Prior to her scuba career, Gigi was a registered respiratory therapist for a little over 20 years. She wanted a change, so then decided to focus on scuba diving. She then decided to move to Cozumel part-time in 2016, then 2 years later became a full-time resident.
Gigi enjoys most water sports and rowed competitively for 8 years prior to her move to Cozumel. On her days off she enjoys road trips to the Yucatan, going to the beach, spending time with friends, and volunteering at the hyperbaric chamber.

Gigi has 2 children and 3 grandchildren all living in Oklahoma. 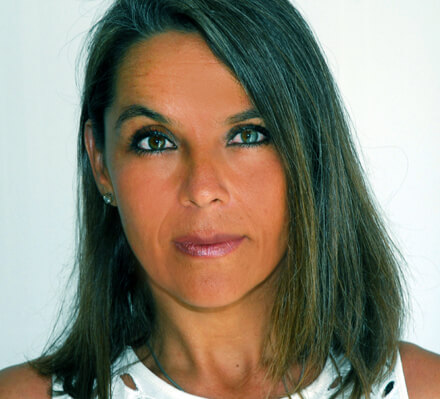 Lorena joined Deep Blue in 2014 as a Receptionist / Customer Service / Sales person.  She has now taken over the email reservations from Gary who retired after 15 years!.  She loves meeting people from all over the world and helping travelers have a pleasant stay on the island.

She was born in Guadalajara, Mexico, but moved to Cozuzmel in 1996 after graduating from college.  She loves everything the island has given her, specially the beach and the reefs. It is here that she became a certified diver and she knew     this was home.

Her passion is her family, underwater photography, cooking and gardening.  She is a mother of 2 young boys and is happiest spending time with them. 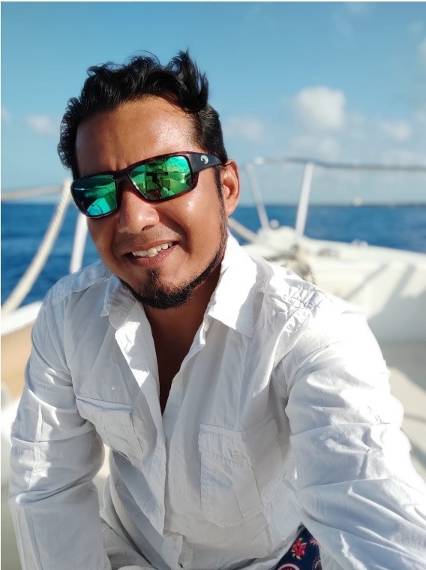 Julio is Deep Blue's newest Dive Master.  He started working for Deep Blue in May  2021.  He comes to Deep Blue from Cozumel Scuba Club where he worked for the last 3 years.  Prior to that, he worked for Sand Dollar Sports for 11 years.

Julio was born in Veracruz, Mexico, and came to Cozumel with his family in 1986.  His family still resides in Cozumel.

He started diving when he was 16 years old and got certified at Aqua Safari which was covered by a generous American that must have seen Julio's potential.  He got his Dive Master certification 1 year later but had to wait until the following year when he turned 18 to be able to work.

In his free time, he enjoys spending time in the gym lifting weights, which makes loading tanks a bit easier when you have some muscles!  When he can, his favorite place to visit is Chiapas. 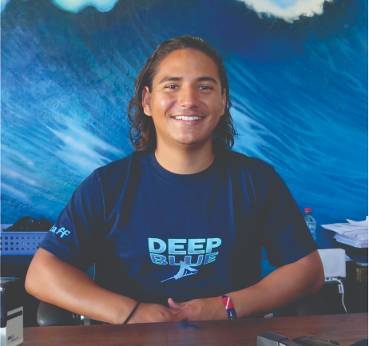 Diego just started with us one year ago working behind the desk and also as a  Dive Master and underwater photographer.  He comes to us from Aqua World, based in Cancun.  He was born in Leon, Guanajato, MX, where his parents and siblings live today.  Diego has wanted to be involved in the Scuba diving industry since he was a boy.  He started diving in 2015, and got his Dive Master Certification while in Cancun.  He loves doing underwater videography and sharing the beautiful underwater world with everyone to help make them     ecologically aware. 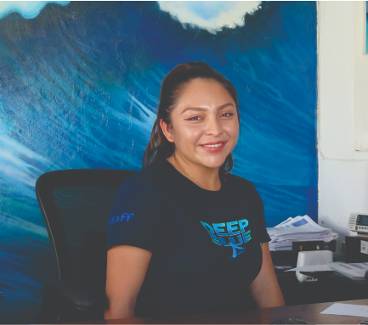 Chris is our newest staff member.  She started with Deep Blue in November 2021.  She comes to us from Aqua Safari where she spent 4 years as a Sales Agent.  She was born and raised in Cozumel, where she is continuing her education at the University of Quintana Roo.  She has also been teaching English to adults and children for the past months.  In her spare time, she enjoys cooking, baking, and riding her bike. 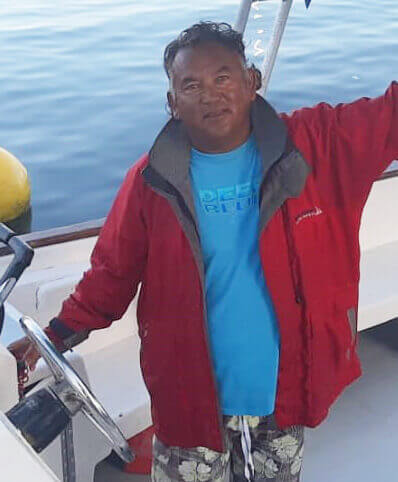 "Soldado" (soldier) has been a boat Captain with Deep Blue, since 2017. 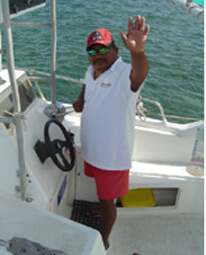 Roberto was born in Peto, a small town in the Yucatan Peninsula. Moved to Cozumel 23 years ago. Is married with 2 boys and 3 girls ages 2 to 20! Has been a boat captain for Deep Blue since 2002 as a permanet employee and also as a freelancer. 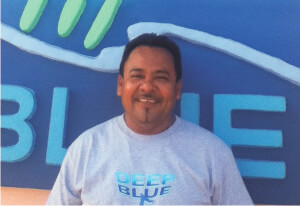 Lucio was born in Tepacan, Yucatan and has lived in Cozumel for 40 years. He worked as a Captain for 26 years and sailed around the Yucatan Peninsula and the channel.  He is married and has a baby boy.  Lucio is our Operations Manager since 2010. He keeps all the boats, trucks, dive equipment, office equipment, etc. running. 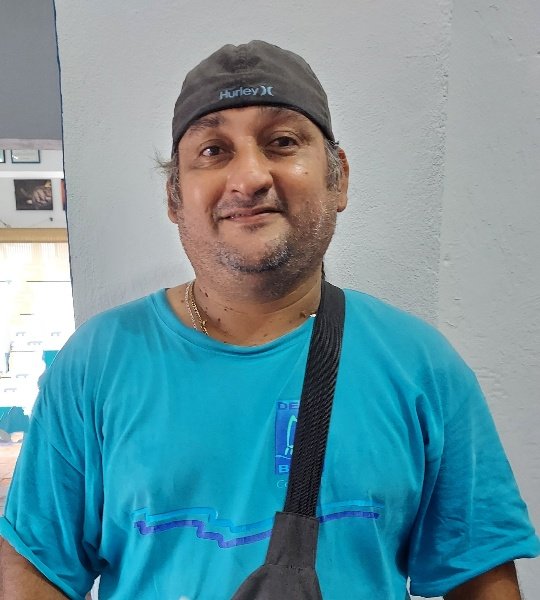 David is Deep Blue's Equipment Manager since 2014. His primary responsibilities are cleaning the equipment after dives, ensuring all regulators are in working order, sizing equipment for divers, and making sure all equipment is transferred to the boats for diving.

David was born in Merida, Mexico. He has lived in Cozumel for the past 15 years.  He is married and has 3 adult children, and 3 grandchildren ranging from 4-16 years old.

In his spare time, David likes doing metalwork, home improvements and repairs, but most of all spending time with his family. 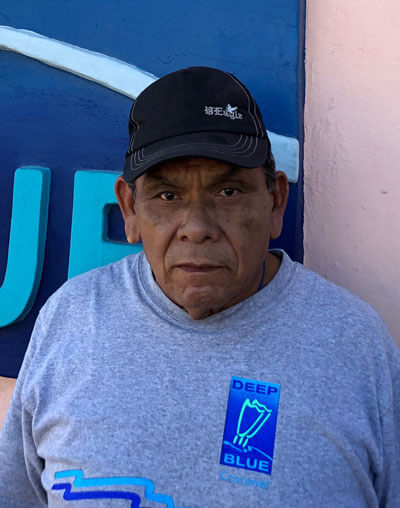 Jorge has been our driver since 2015.  He is from Valladolid, in the Yucatan Peninsula, and came to Cozumel 45 years ago.  Has worked all over the island in construction, as a waiter, bartender, bellman, etc  He also owned a Cantina and butcher shop some years ago.  He has a wife, 7 kids, and 8 grandkids. 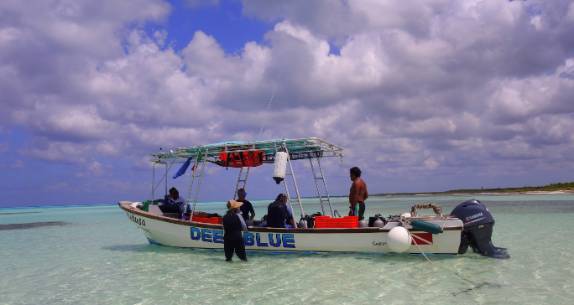