MEET THE CREW AT DEEP BLUE.

Gary Hilson is head of reservations at Deep Blue and is responsible for answering the majority of our many emails.

Born in Yorkshire, England, Gary lead an interesting and varied life before finally settling here in Cozumel and working at Deep Blue. 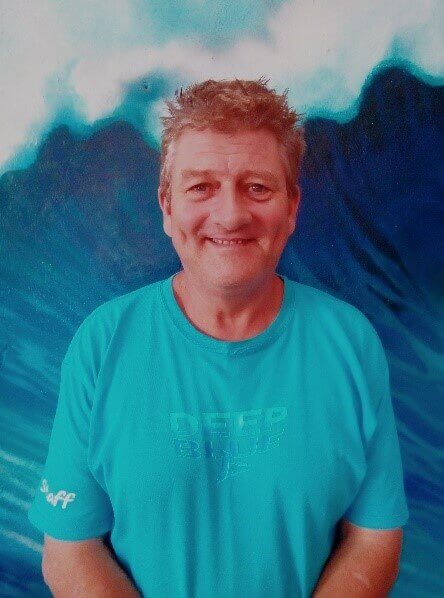 He started diving in the UK in 1986, becoming a PADI instructor in November 1995. After working in Turkey for two years he decided to set off on a worldwide trip. Starting in Belize in 1997 Gary worked at Coral Key Conservation for three months after which he planned to go backpacking along the west coast of Mexico before heading to LA and flying to New Zealand. However, a back injury ruined Gary`s plans and saw him heading to Playa del Carmen with the intention of resting for a few weeks. It was there that he met a guy who persuaded him to go and work in Cozumel for his SNUBA company. He did this for a year then left for the USA in 1999 where he ended up managing a cleaning company. After that he headed to Taiwan where he taught English to five year olds.

The turn of the century saw Gary once again in Cozumel working in the SNUBA business. In 2003 he purchased his own catamaran ¨Zorro¨ and ran SNUBA and snorkel tours. However, in October 2005 Hurricane Wilma battered Cozumel and after the island recovered SNUBA tours were no longer permitted in the marine park forcing Gary to close his business in May 2006. Finally, in 2007 Gary came to Deep Blue where he has worked ever since as an integral part of our team.

In his spare time Gary enjoys diving, his favourite site being Punta Tunich which he says reminds him of the Yorkshire Moors! He can also be found working on his house renovations or relaxing with a good book or film.

Gary is married to Bella and has two dogs and a cat.

MICKEY CHARTERIS AT THE COZUMEL PLANETARIUM.

On May 17 and 18 Mickey Charteris, author and photographer of the book Caribbean Reef Life - A Field Guide for Divers, gave a presentation at the planetarium here in Cozumel. A few of us from Deep Blue attended the hour long talk about the reef and some of the creatures that inhabit it, accompanied by some of Mickey’s amazing photographs.

Mickey began diving over twenty years ago and almost immediately became hooked on capturing what he saw on film. He worked as an underwater videographer, some of his early work featuring on the Discovery Channel. After borrowing a friend’s still camera his passion switched to photography and he started work on a "species library” which to date numbers 1500 plus. He is even responsible for the discovery of four new species! Two blennies, one sea slug and a shrimp. Three have not been officially recognised yet but the shrimp has been named Periclimenes Rincewind, by Mickey. He explained that the name comes from the character Rincewind in Sir Terry Pratchett's "Discworld”, a cowardly wizard always trying to hide from trouble mirroring the shrimps’ ability to camouflage itself perfectly on its host.

Mickey a Canada native who grew up in South Africa has been lucky enough to have dove over twenty-four locations worldwide but his real love is for the reefs of the Caribbean, particularly the coral reef surrounding the island of Roatan, Honduras where he now lives.

A visually stunning display of some of Mickey’s photos alongside an informative and entertaining talk gave us all a great insight into the behaviors of some of the reef dwellers. We learnt about the feeding, fighting and mating strategies of these creatures and examples of when they co-operate.

Sadly, these days no talk about the reef could fail to mention the damage that is occurring due to climate change and pollution. Mickey demonstrated, using a series of photos he had taken in Roatan, the devastating effects of coral bleaching. He finished his talk by urging us all to think about how we can protect our precious reefs and oceans.

This month see’s the return of our underwater photography competition!

For a chance to win a Cozumel Dive Guide submit your entries by liking our Facebook page and posting your picture (one per person) before the 1st of September.

The winner will be decided by our guest judges Diana and Hernan, owners of local vegan restaurant Cali Café. 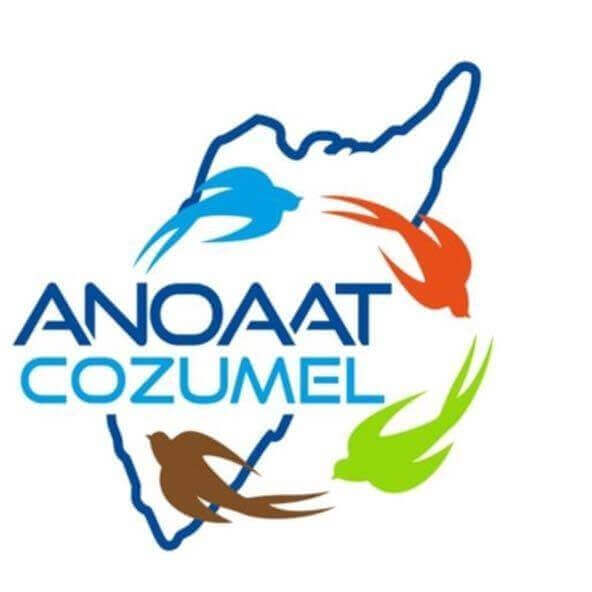 Did you know that Deep Blue is a member of ANOAAT-Asociacion Nacional de Operadores de Actividades Acuaticas y Turisticas.

Currently numbering thirty-two members and growing.  The main goal of this organisation is to look after the reefs and environment of Cozumel for its residents and many guests. This is achieved through education and training and also by promoting safety standards in all aquatic activities.

Members consist of dive shops as well as fishing and other watersports operators. Membership has a strict requirement that all operatives must be legally registered businesses and that all their permits, licenses, insurance and safety standards be current.

One more reason why choosing Deep Blue to dive or snorkel with is a great choice.

A visit to the hyperbaric chamber at Cozumel`s International Hospital.

Murals painted all over Cozumel to raise awareness for ocean…

Meet Paulo, learn about our Splendid Toadfish, and It's CARNIVAL…

Stay tuned, you will soon receive news and exclusive content from Deep Blue!